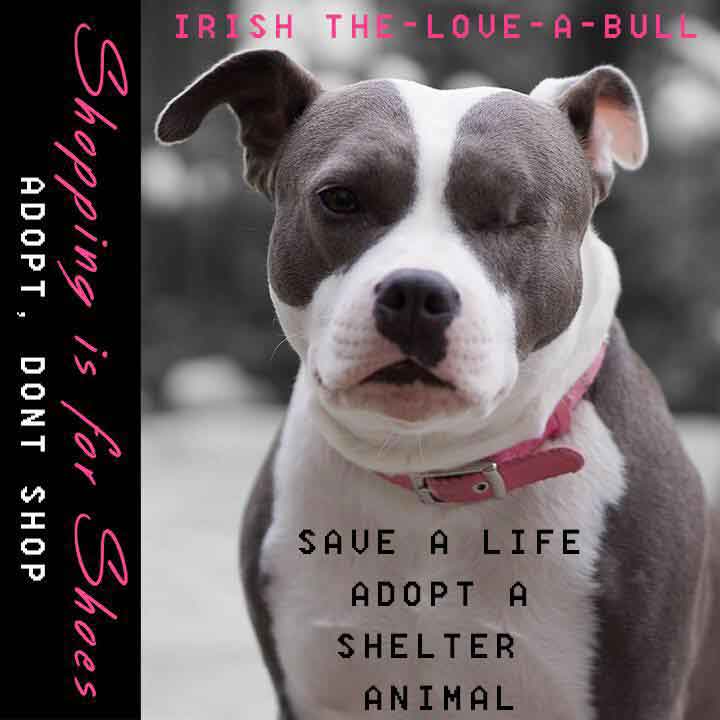 Irish, originally named Iris, was found and rescued in Los Angeles, California. Deeply buried in some bushes on a busy commercial street, it was reported to a local dog rescue that there was a pregnant dog on the property of a business and she needed help. What makes Irish's story so touching is that even though she was found with her left eye wounded when she was rescued, she was vigilantly protecting and concealing her three newly born pups. Her gentle nurturing nature made her more concerned about her babies than herself.

After the rescue Irish and her three pups went to a foster home so they could grow healthy and hopefully one day find forever homes. Irish and her pups' rescue was filmed and went viral on YouTube. There have been over 11 million views world wide of her rescue.

All the pups and Irish were adopted and are now living happy dog lives. They were lucky, this doesn't always happen and there isn't always a happy ending to an abused dogs journey, especially if that dogs breed is labeled Pit-bull.

It is a story such as Irish's that needs to be told, so as to educate, advocate and help end animal abuse, dog fighting and discrimination against "Pit-bull" type breeds. Irish's mission is to prove love does prevail and help put an end to the abuse.